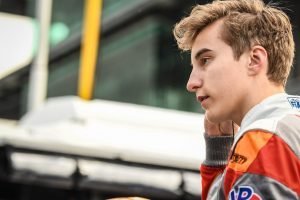 After facing challenges at the Indianapolis Motor Speedway in his previous one and only oval attempt in the 2019 season, newly rebranded HMD Motorsports driver David Malukas is seeking redemption this weekend at World Wide Technology Raceway at Gateway. The final oval event of the 2019 Indy Lights Presented by Cooper Tires championship season will be taking place this weekend in Madison, Illinois.

“I did not have the opportunity to show my abilities in Indy,” Malukas stated. “I know that I can be quick on an oval, and I was not able to prove that the last time around. We had a very good test with some new people in key places and everything went very smooth. This is my chance to show what I am capable of on an oval, and we will be aiming for the top step of the podium.”

Just last week, Malukas participated in one-day series test event at WWT Raceway where he quickly got his confidence back and was able to work his way up the charts. After completing 181 laps over the course of three test sessions, Malukas gained speed each and every time he hit the track. He ended his day with the second fastest time, only 0.0837 seconds behind his HMD Motorsports teammate Toby Sowery as the duo finished the day first and second.

“Having the ability to take an entire test day without the pressure of a race weekend is exactly what I needed,” Malukas continued. “If I’m being completely honest, my crash at Indy rattled me, and I had not been back on an oval since. I used the first test session to get comfortable on an oval again and to shake my nerves and then went out for the final two test sessions confident and working to find speed, which we were able to accomplish.”

Malukas currently sits sixth in the championship points standings and with the end of the season coming into view, the Chicago, Illinois resident is looking to finish out his rookie season strong.

With only two days of on-track activity, there will be limited track time before the race. On Friday, August 23, the weekend will begin for Malukas with a 45-minute practice session prior to qualifying later that evening. The weekend will come to a close on Saturday, August 24 with the green flag flying for round fourteen of the sixteen race championship at 3:25pm (CDT).