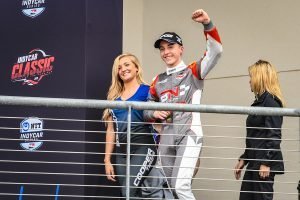 After scoring his first career podium in the Indy Lights Presented by Cooper Tires Championship, 17-year-old David Malukas is looking to carry that momentum into Indy this weekend. Competing at the Indianapolis Grand Prix in the top rung of the Road to Indy ladder program, the BN Racing driver will take on the 2.439-mile, 14-turn permanent road course for rounds five and six of the 2019 championship battle.

“We have had some great results so far in 2019 but my first podium has only made me hungrier for more,” explained Malukas. “The team has done a great job and the speed has been there each and every race weekend. With it being my rookie season in Indy Lights, I am learning along the way and seem to progress as the weekend goes on. With pretty good track knowledge of Indy and already driving an Indy Lights car at the facility in 2018, I am looking to come out of the box even stronger during the first test session later this week.”

With a pair of fourth place results at the Grand Prix of St. Petersburg in early March, Malukas scored his first, and BN Racing’s first, career Indy Lights Presented by Cooper Tires Championship podium at the Circuit of the Americas (COTA). Rebounding from an incident in the first wheel-to-wheel action at COTA, Malukas started tenth on the grid in round four and drove his BN Racing prepared and HMD Trucking backed machine to the third step of the podium.

The Chicago, Illinois resident added, “Indy is a big weekend for me as this and Road America are considered my home events on the calendar, and we will have several several family members, friends and partners in attendance. My goal is simple. I want to win and will work hard to do so but at the very least, I am confident that we will be able to challenge for podiums in both events this coming weekend.”

Unofficial practice will begin on Thursday morning with official practice taking place late Thursday afternoon. Qualifying and round five of the 2019 campaign will take to the track on Friday while a second qualifying session and round six will take place on Saturday, just before the start of the NTT IndyCar Series Indianapolis Grand Prix.