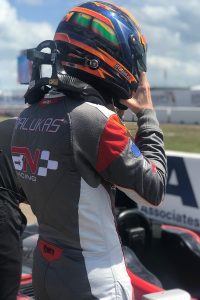 Making his Indy Lights presented by Cooper Tires series debut this past weekend at the Grand Prix of St. Petersburg, BN Racing driver David Malukas impressed all with his speed and consistency. With the goal to complete every race lap, Malukas did just that as he piloted his HMD Trucking backed #79 BN Racing entry to a pair of fourth place results, leaving the first event weekend of the year sitting fourth in the overall series points battle.

“It was a great weekend for not only myself but the entire BN Racing program,” explained Malukas. “The first event is always a little stressful and nerve-racking, especially when you move up a division. The team and I had a goal for the weekend and we obtained it with no issues. We can now put our heads down and push hard towards the next event in two weeks’ time in Texas. A huge congrats to Toby Sowery and Zach Holden for their podium results in Indy Lights and USF2000.”

After an uneventful practice session on Friday morning that saw the 17-year-old claim the fourth quickest lap of the session, Malukas continued onto qualifying for race one, where he once again was the fourth fastest and would line up outside of the second row for his first career Indy Lights start on Saturday afternoon.

A clean start and a solid opening few circuits saw Malukas hound the third place driver as he continually tried to find a way by. Battling hard for the final step of the podium, Malukas came up just short when the final checkered flag had flown but was satisfied with his efforts.

Malukas continued, “It was a good series debut. I would loved to have been on the podium but for my first event, I am happy. To be able to keep pace with last year’s series championship-winning team is a testament to the complete BN Racing program.”

Race two qualifying saw a little bit of a hiccup for the rookie driver as he could only put down a lap that was good enough for sixth, but the motivation was there to march forward and garner the best result possible. Starting from the outside of row three and avoiding a turn two melee, Malukas jumped to the fourth position on the opening lap and held station for the remainder of the event.

With fourth place results in race one and two, David Malukas sits fourth in the IndyLights Presented by Cooper Tires Championship point standings. With the next event at the famed Circuit of the Americas over the March 22-24 weekend, Malukas will look to continue his upward trend and momentum in his hunt for race wins and podium results.