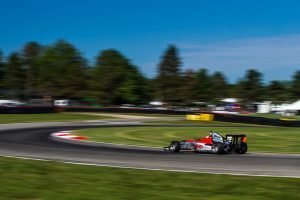 It was a career year for second year Road to Indy driver David Malukas. Making the move to the Indy Pro 2000 Championship Presented by Cooper Tires (formerly Pro Mazda Championship Presented by Cooper Tires), after a brief hiatus in USF2000, Malukas capped off his best formula car season to date with three victories, six podiums, two pole positions and one dominant weekend, sweeping each and every official on track session.

“It was a great season but along with the highs come the lows,” explained Malukas. “Being able to stand on the podium six times was good and to stand on the top step of three of them was one of the best feelings ever. However, a drive through penalty took away a chance at a podium in Indy, a crash at Lucas Oil Raceway and a mechanical issue while leading at Mid-Ohio really hurt our overall point total for the year. 2019 presents a new challenge and I am 100% focused.”

Kicking off the season in the Streets of St. Petersburg, Malukas piloted his BN Racing prepared Pro Mazda to a second place podium result. Starting the season off on the right foot, another podium was gained at Barber Motorsports Park before a low point at the Indianapolis Grand Prix weekend.

Malukas continued, “Indy was not a good month for results. We were really quick on the road course as the BN Racing guys nailed the setup but an unfortunate drive through penalty ruined any chance of a good result. On to Lucas Oil Raceway and the first oval of my career, it took a while for me to get comfortable but when I did, I had top-five pace. An unfortunate incident took me out of the race and caused a lot of work for the team.” 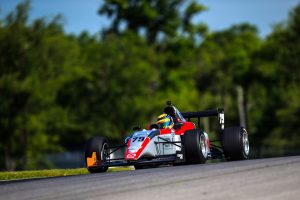 A few weeks later the hard work paid off as the Chicago, Illinois resident dominated Road America. Scoring a pair of pole positions, two fast lap honors and topping the podium in both wheel-to-wheel races, Malukas claimed a perfect weekend at one of North America’s most historic tracks and in front of the complete Road to Indy ladder program.

Heading north of the border for the one and only event in Canada, Malukas entered the Streets of Toronto with momentum and confidence. Showing pace, and claiming the second fastest lap in both wheel-to-wheel events, an incident in race one forced him to retire while a punctured tire in the second race on the weekend hindered any chance of a good finish.

The Mid-Ohio Sports Car Course was the facility that Malukas was looking forward to since his weekend at Road America. A long, flowing historic circuit and two more chances to claim the checkers, the future motorsports star claimed a second place result in race one, before a mechanical failure while leading in race two forced him to the sidelines. Upset that he was unable to make it to the checkered flag, Malukas did not let his emotions get the best of him as he hopped the fence and into the crowd to take pictures with fans and sign autographs for kids becoming an instant hero to some young Mid-Ohio race fans.

The cross-country trek to the Portland International Raceway proved to be fruitful for the American as Malukas ended his season with his third victory and secured the fourth position in the overall championship chase. 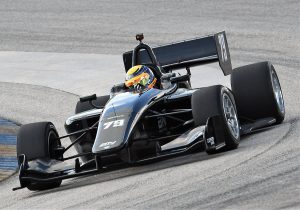 With a new season on the horizon and a new challenge, the Indy Lights Presented by Cooper Tires, David Malukas is one step away from his ultimate goal of being an IndyCar driver. Along with a new season comes a new media program, including a new website that is now officially online at www.DavidMalukas.com.

Malukas added, “This season has been great and I can’t thank all of my partners for their hard work and continued support. A huge shout out to BN Racing, Bryn Nuttall and his complete staff there as they have managed to build a program from the ground up, and not only a program, a winning program. Another great partner of mine has been HMD Trucking and without them, I would not be where I am today. Also a special thank you to FreemUK for keeping me safe as well as making me look good. Best suits on the market!”

Taking time away from the track for the holidays, David Malukas and his BN Racing Indy Lights Presented by Cooper Tires program will hit the track in January to continue their winter test program.